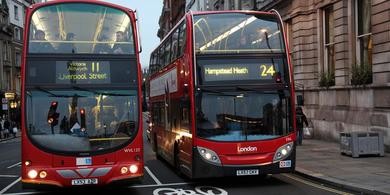 We wanted to be a founding partner for this campaign because you have told us how important it is to make transport more autism friendly. In our recent Autism Act survey we found out that 75% of autistic people say that unexpected changes, like delays, diversions and cancellations, make them feel socially isolated and 52% of autistic people said that a fear of experiencing unexpected changes has stopped them from going on a bus or train. As we highlighted in our Too Much Information campaign, autistic people can feel anxious about getting on public transport, so much so that they may be unable to leave the house at all.

We asked you to help us tell the Government that they should improve autism understanding on public transport - and it has listened. In its Inclusive Transport Strategy, the Government sets out plans for a national disability awareness campaign.

Today's announcement is the first part of this campaign, and the Government is asking transport companies, businesses and charities to sign up to support ‘It's everyone's journey’. From next year, our charity – alongside those other partners – will be helping to make sure the campaign reaches as many people as possible. We want to improve autism understanding among the millions of people who make journeys every year, to create a transport network and a society that works for autistic people.

Here’s what Jane Harris, Director of External Affairs at the National Autistic Society, says about the campaign:

Our charity is really pleased to support this much-needed campaign.

"Autistic people are a huge part of our society - around 1 in 100 people. They need to travel school, work and to the shops, just like everyone else. But many autistic people can feel so anxious about travelling on buses and trains, that they find it hard to leave the house at all.

“It's not just worries about crowds, confusing announcements, and unexpected changes, like delays and diversions. It's also judgmental tuts and stares from other passengers, who see someone acting differently or in distress, but don’t recognise that it’s because they’re autistic.

Real life
During World Autism Awareness Week 2019, we interviewed one of our content creators, Connor Ward, about how an act of kindness and understanding from a member of the public helped him get home on public transport after an unexpected change.

What we've done
We, along with our supporters, have been calling on the Government to recognise barriers and make public transport more accessible for autistic people. Many of you responded to the Government’s consultation and shared your story with them - and 10,000 people signed our open letter.

In 2018, we released our third in the series of Too Much Information videos, featuring autistic actress, Saskia Lupin. The film demonstrates some of the barriers autistic people can face getting on public transport.