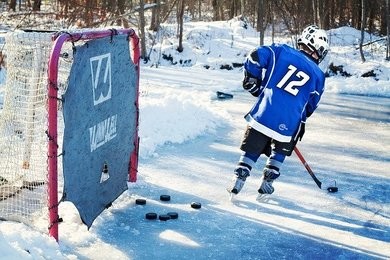 The relationship between the National Hockey League and the autism community is a long-standing one, but until recently the focus has been focused primarily on financial support and raising awareness, with many teams holding fundraisers and hosting “Autism Awareness” nights.

In Washington, D.C. the Capitals’ unique engagement has been spearheaded by Paige and Nic Dowd. The couple came to D.C. when Nic was signed in the summer of 2018, and since then they’ve not only participated in the majority of the Capitals’ preexisting charitable endeavors–they also started their own.

“I saw how the day-to-day life of the parents can be challenging, and going to events that would be easy for some parents are more difficult for others,” Paige said to Taryn Bray for WashingtonCaps.com. “Nic and I wanted to make it a safe environment for kids to be able to enjoy a hockey game.”

Together they founded a program called “Dowd’s Crowd,” which helps children on the autism spectrum attend hockey games. Since many people with autism can be overwhelmed by stimuli like loud noises, bright lights, and large crowds–all typical features of a hockey game–they need some accommodations. Dowd’s Crowd provides resources to counteract, minimize, or soften those stimuli so that the kids can enjoy the game, like sound-canceling headphones and sunglasses.

The Dowds are connected with families through the organization Autism Speaks (which has made great strides in shifting their approach away from finding a ‘cure’ and towards improving quality of life). The Dowds then provide tickets for the children and their families to Capitals home games, give them sensory kits for during the game, and then meet with them afterward.

Paige has been passionate about improving the lives of people with autism since her time at St. Cloud State University, where she and now-husband Nic were students. She trained to be a speech-language pathologist and worked with autistic youth while they lived in California.

“It’s important to both Paige and I because we’re in a position where we can shed awareness and shed some light on these children,” Nic said in a piece by Chris Kuc of The Athletic. “You can see on their parents’ faces that we did something good. The kids enjoyed it, their parents took a breath and they enjoyed it and it was something where it allowed their kids to escape a little bit and enjoy the game. A lot of those parents and kids had never been to an NHL game before so that alone was an experience.”

Hall of Famers Ted Lindsay and Sergei Fedorov have helped raise awareness and significant financial support. Former Blues player Chris Thorburn recently spoke about what it’s like to live the sometimes-unpredictable life of an NHLer with a son who has autism.

Dowd’s Crowd and other related NHL initiatives are just one part of a larger societal shift towards more and better inclusivity efforts. Over the past few years, sporting, theatrical, and cinematic venues have been working to become accessible to fans who previously hadn’t been able to attend events in person.

According to CNN, ten NHL teams’ arenas have been certified as sensory inclusive. The Carolina Hurricanes were the first to be certified as “sensory inclusive” in 2017, when the idea was proposed by high schooler Cameron Jarvis. In addition to sensory kits and staff training, the PNC Arena also has a quiet area where individuals can go to if overwhelmed for any variety of reasons.

The “sensory inclusive” certification process is run by Alabama-based nonprofit KultureCity. It “entailed the staff being trained by leading medical professionals on how to recognize those guests and fans with sensory needs and how to handle a sensory overload situation. Sensory bags, equipped with noise-canceling headphones, fidget tools, verbal cue cards, and weighted lap pads will also be available to all guests who may feel overwhelmed by the environment.”

The Blues’ Enterprise Center, the Blackhawks’ United Center, and the Predators’ Bridgestone Arena are all sensory inclusive. The Red Wings’ Little Caesars Arena was the first joint NHL/NBA venue to be certified back in 2018.

The NJ Devils, Capitals, and Vegas Golden Knights are among the teams who have also held “autism awareness” nights during games. The Capitals’ first was in 2005, in conjunction with Athletes Against Autism, founded by former Capitals’ goaltender Olie Kolzig. Kolzig’s son Carson is on the autism spectrum. The legendary Capitals goaltender also founded the Carson Kolzig Foundation in 2004.

After his first year with the Capitals, Nic was re-signed to a three-year contract extension, meaning that Paige, Nic, and Dowd’s Crowd will continue to be a valuable part of the DC community.