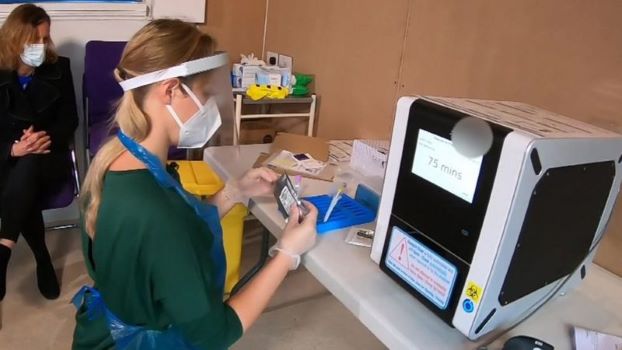 Rapid tests in care homes could be a game-changer

Rapid Covid tests in care homes could be a game-changer for vulnerable people and their families, say researchers.

Access to fast tests will make it easier for relatives to visit care home residents isolated by the pandemic.

A trial suggests tests by staff are as accurate as those done in hospitals, says lead researcher Prof Adam Gordon of Nottingham University.

In time, tests could be offered not just to residents and staff but also to relatives and friends, he says.

Staff at four care homes in England have been trained to carry out and analyse the tests as part of a trial.

Many care homes first shut their doors to visitors eight months ago to try to protect residents from the spread of coronavirus.

But with visits still very limited, families argue the restrictions are causing huge distress and confusion, particularly for residents with dementia.

For care home residents like 96-year-old Janet Dunham, rapid testing for relatives would mean she could see more of her family. She found the weeks when all visiting was stopped very difficult.

"It felt as if you had done something wrong and you'd got to be kept in prison and you knew you hadn't. Not to be able to see your family is dreadful really," she says.

She lives in Landersmeads care home on the outskirts of Nottingham, which is taking part in the trial. 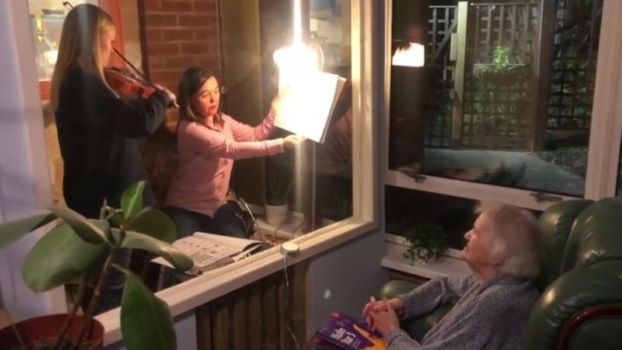 At the moment, only staff and residents are being tested, but it is hoped that eventually, relatives could be checked before visits.

In one of its outbuildings, the home has set up what amounts to a small Covid-19 testing centre and staff have had special training.

They take throat and nasal swabs, place them in a solution and then put the sample in a machine that runs the test. It can do eight tests at once and takes 85 minutes to provide results. Next, they will trial a machine that takes just 15 minutes to run a single test.

Prof Adam Gordon, who is president-elect of the British Geriatric Society, says care home staff have found the technology relatively easy to use, with a very low error rate.

He says the system "gets it right in 99 cases out of every 100 tests that are done - that's about as good as a diagnostic test could be. And it means that care home staff

are delivering this test with the same level of specificity that we see when it's used in hospitals."

They still have to finalise results, but expect to send a report to the government within weeks. Prof Gordon believes rapid testing will make a real difference.

"This test works at least as well in care homes as it does in other settings. And it could be a game-changer for the vulnerable people who live here."

Until then the home has built pods so relatives can visit safely. It means Janet Dunham can once again teach her great granddaughter the violin, but there is still a screen between them and they cannot touch or hug.

So far, in England and Wales, nearly 17,000 care home residents have died in the pandemic, the majority during the first wave. At Landersmeads they lost six residents to the virus.

Ros Heath runs the home, which is one of relatively few in the country rated outstanding. She says their priority has to be protecting people from Covid, but she also believes it is vital for residents to see the people they love.

"If we could have testing [for relatives] where someone can actually come in and be with somebody, obviously taking necessary precautions, I think it would be a massive step forward," she says.

"We support a lot of people with dementia," says Ros. "They can't rationalise why their relatives aren't here… So when it became a long-term thing - and we are now into the eighth month of not having open visiting - it had a devastating effect on people's health."

At the moment, all care staff in England have access to weekly testing and residents are tested monthly, but it can take several days for the laboratory results to come back.

Rapid tests run by individual homes should make it easier to check people on the day they want to visit, but it is not clear how that would work in practice. 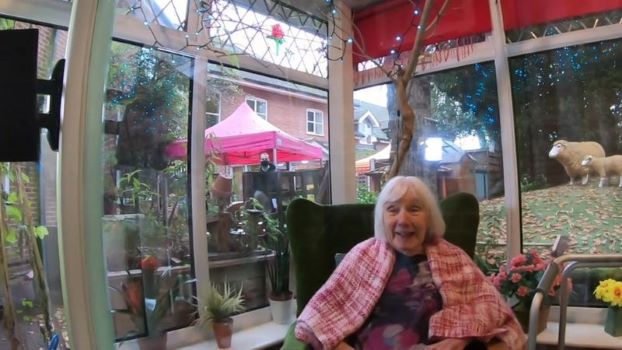 The government says a pilot scheme to test the safety and practicalities of testing visitors will begin on 16 November, involving 30 homes, across four local authority areas where there is a low prevalence of Covid-19.

For Clare Brown, whose mother Helen lives in Landersmeads, this needs to happen quickly. Her mother has dementia and Clare believes her ability to understand what is going on deteriorated significantly in the weeks when her family couldn't visit.

"For the people who have been desperate for it for months and months and months, it can't happen quickly enough now. And for my mum, in particular, and people like her, to have access to people who know her and love her best is such an important part of her care. It can't be ignored."

The research is part of the Covid-19 National Diagnostic Research and evaluation programme, or Condor, to look into the use of new technologies in the fight against coronavirus. It is funded by the National Institute for Health Research and backed by the government.