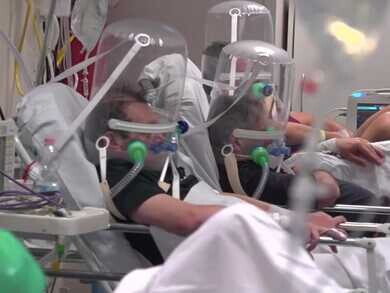 The surge in Covid hospital cases has left key hospital services in England in crisis, doctors are warning. 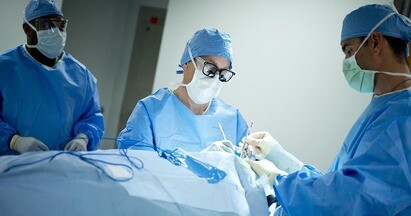 Meanwhile, the total number of people facing year-long waits for routine treatments is now more than 100 times higher than it was before the pandemic.

Cancer experts are also warning the disruption to their services was "terrifying" and would cost lives.

Reports have emerged of hospitals cancelling urgent operations - London's King's College Hospital has stopped priority two treatments, which are those that need to be done within 28 days.

It comes after a surge in Covid patients in recent weeks.

One in three patients in hospital have the virus - and at some sites it is more than half. 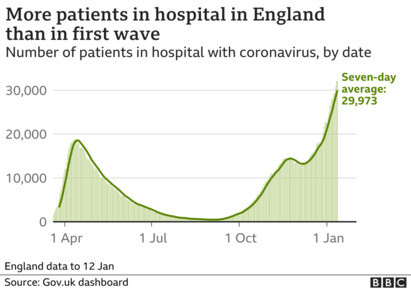 'I'm strong, but I've broken down'

Paul, 57, from Manchester, had his radiotherapy treatment for cancer cancelled at the start of January.

His tumour - between his lungs and above his heart - cannot be operated on because it is being fed by two arteries so doctors can only stop it growing.

He had been waiting for radiotherapy since 2020.

"I'm a strong person but I've been broken down. My family are all rooting for me but I can't see them.

"Because it's cancer it's stressful. I'm just constantly feeling anxiety."

NHS England medical director Prof Stephen Powis said the NHS was facing an "exceptionally tough challenge", adding services would continue to be under pressure until the virus was under control.

But he stressed non-Covid treatment was still happening - with three times as many diagnostic tests and twice as many operations being carried out than in the spring when the pandemic first hit.

The data published by NHS England showed the scale of the impact from dealing with Covid on key hospital services.

The data published on Thursday showed:

The figures for cancer date back to November, before the surge in cases.

At that point, the number of urgent cancer check-ups and treatments being started was at normal levels.

Prof Pat Price, of the Catch Up with Cancer campaign, said services were facing the "biggest crisis" of her 30-year career.

"This is a truly terrifying scenario," she added.

And the Royal College of Surgeons warned the pandemic was having a "calamitous impact" on waiting times for planned surgery.

Sarah Scobie, from the Nuffield Trust think tank, said services were under "intolerable strain", adding "the worst is yet to come".

Saffron Cordery, of NHS Providers, which represents hospital bosses, agreed: "The next few weeks are no doubt going to be the most testing in NHS history."