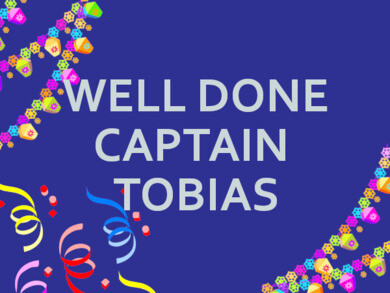 A nine-year-old boy with cerebral palsy who raised more than £100,000 by using his walker to complete a lockdown marathon has begun a new challenge to run the same distance using a race runner.

Tobias Weller completed the first 270m of what has been dubbed his “Tobiathlon” on Sunday morning, to the cheers of his friends and neighbours on the street outside his home in Sheffield.

And the youngster – who has never run before – said he was “chuffed to bits” with his achievement.

Tobias was inspired to undertake his original challenge by Captain Sir Tom Moore and received a message of congratulations from the 100-year-old national hero when his fundraising passed the £100,000 mark.

He has now raised more than £128,000 and decided to embark on his new challenge after being supplied with a three-wheeled race runner by the charity CP Teens.

And, despite only managing a few metres while practising with the equipment, Tobias was determined to begin his next marathon on Sunday.

She continued: “He completed it with a big, fat smile on his face. He’s run today for the first time in his life on the first day of the challenge.

“It’s mind-blowing stuff, it’s a special moment. It melted my heart when I saw him running and the wind through his hair.”

Tobias said he felt “magnificent” about his new challenge and added that it was a “totally amazing” feeling.

Nine-year-old Tobias Weller, from Sheffield, who has cerebral palsy and autism, began his new challenge to run a marathon using a race runner (Joe Giddens/PA)

“Today, I set off in a race runner, I managed 270m. I’ve only used one once before, I managed five metres. Dunno if I can complete a marathon but I’ll give it my best try!”

He added later: “I could feel the wind in my hair!”

The neighbours who cheered him on daily during his first challenge came out to support him again on Sunday.

Ms Garbutt said: “Many people from the street came along – they’ve done that every step of the way.”

Tobias, who also has autism, originally aimed to raise £500 for Sheffield Children’s Hospital and Paces School, his special school in the city.

On Sunday, the hospital and The Children’s Hospital Charity tweeted: “We’re behind you every step of the way!”

And Paces School wrote: “The wonderful Captain Tobias didn’t stop at one marathon… he’s now doing another one! Today he has set himself a challenge of learning to use a race runner! Go, go, go Captain Tobias!”

Donations can be made at www.justgiving.com/crowdfunding/ruth-garbutt-3