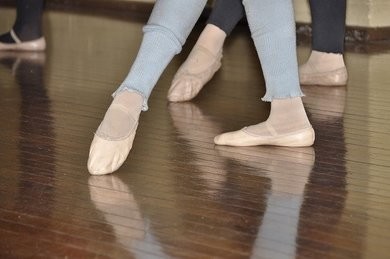 A SEPTUAGENARIAN has spoken of how she 'aches from smiling' thanks to a dance class especially for people with Parkinson's.

English National Ballet holds the dance sessions at the Wesley Memorial Hall in Oxford, and the People's Postcode Lottery, whose players help to fund it, is raising awareness of the classes.

Pamela Hutchinson-Collins is among those who attends, having learned ballet as a child from the age of three.

She said :"I absolutely love it. I ache from smiling when I come out of the classes.

The classes are designed to ease some of the symptoms of Parkinson's, which include shaking, slow movement and stiff muscles.

Susan Bates, who also attends, said: "I can honestly say it makes such a difference - I feel so much better.

"From the camaraderie, to the music and the care that’s shown by everyone involved, it really is fantastic.

"It is exercise but there’s so much more to it – it’s joyful."

The dancers welcomed a celebrity guest back in November - television presenter Fiona Phillips, who is a charity ambassador for People’s Postcode Lottery.

She took part in a class and spoke to the dancers, who all have a diagnosis of Parkinson’s.

The presenter's grandfather had the degenerative disease, and her uncle is currently living with it.

She said: "It was fascinating to learn how dance and movement is helping build the confidence and strength of everyone involved, as well as alleviating some of the physical symptoms that can be experienced with Parkinson’s.

"What was also apparent was the real sense of fun and friendship that the dancers get from these classes.

"It was fantastic to know that players of People’s Postcode Lottery have helped contribute towards that."

The classes also run in London, Liverpool, Ipswich and Cardiff, and have gained £17,585 of funding from the Postcode Community Trust.

Alison Hartley, head of creative programmes at English National Ballet, said: "We have been running our Dance for Parkinson’s programme for 10 years and it is one of the most valuable and impactful programmes within our engagement offer.

"Many people who attend sessions have never taken part in a ballet class before but they always come back for more.

"To see first-hand their enjoyment and to be able to provide the opportunity for people to be creative and develop their strength and confidence is incredible."

According to Parkinson's UK Oxford, the summer term of classes starts in April and run until July.

More information can be gained from Oxford City Council, which supports the programme, on cthompson@oxford.gov.uk or 01865 252820.