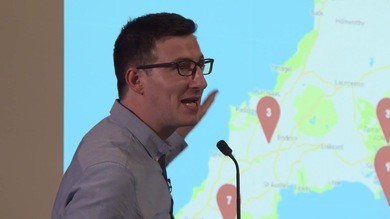 George Pepper, 37, has travelled, had a career, got married and had two children and set up a social network to help the newly diagnosed

George Pepper was just 22 when he was hospitalised after suddenly developing blurred and double vision. Within days he was told the words "you have multiple sclerosis". It felt like his world – and hopes for the future – had come crashing down.

His consultants were cautious when he asked his prognosis – MS is generally a progressive condition that causes deterioration in neurological function leading to disability. But the course of the disease and its symptoms also vary greatly from individual to individual.

"It was suspected I had a brain tumour, so it was a relief that it wasn't that but I didn't know what having MS really meant," he said. "It took a while to sink in. One neurologist told I might not have a relapse for 10 years. Not knowing what to really expect and prepare for causes a lot of anxiety."

However, George wouldn't be one of those milder cases, and within two months he had another attack, bringing more vision problems and issues with slurred speech, swallowing, balance, sensations and hearing. Further relapses were "relentless" over the following 18 months. "It made me very scared for the future and how my life would be. It was at such odds to my friends who at that age were going travelling or moving to London for exciting careers."

George's health problems presented him with a mental challenge to accept his physical limitations and work with them to have and enjoy a fulfilling life, which he has proved is entirely possible – he went on to travel the world, have a career in marketing and get married and have two children.

He also felt there was little support specifically for young people newly diagnosed and so he started a charity called Shift.ms, which he now works for full time. "We have a motto at Shift.ms, which is that we believe that MS doesn’t mean giving up on ambitions, just rethinking how to achieve them."

There are around 100,000 people with MS in the UK, that's one in every 600. It's an autoimmune condition: Your immune system normally protects you by fighting off infection, but with MS it attacks your nerves by mistake. There is currently no cure, but treatments and lifestyle changes can help manage the condition and its symptoms.

Most people are diagnosed with MS between the ages of 20 and 40, yet George says he felt it's easy for this age group to feel isolated.

"It can be very lonely to find out you have MS and I knew that most people are diagnosed when they're young, yet it wasn't what I was seeing at hospital appointments.

"There is great support out there – through the MS Society and the MS Trust. But I went to a support group in Leeds and saw no one there my age. I feel there are a different set of needs for people who are newly diagnosed and those further down the line or with a more aggressive form of the disease. Understandably I think young people can be hesitant to reach out for support as they fear seeing people who are more advanced."

And so five years after his diagnosis, George and his friends set up the forum and social network which has more than 30,000 members worldwide. The charity has also run successful events internationally.

I thought travelling would be impossible because I was having monthly drug infusions. But I found a way round it

George, who is now 37, says he's managed to take advantage of many of the opportunities he initially thought would be closed off to him.  "You worry about the impact on your career but I worked for a marketing agency for eight years and they were very understanding," he said.

"I thought travelling would be impossible because I was having monthly drug infusions. But I found a way round it, and my specialist said it was ok for me to have a stronger one every other month, and I found countries where I could have the treatment."

And so at 29, George went off of a six-month adventure and visited India, Japan, Indonesia, Argentina, Brazil and Australia.

George, who has tried different medications and tries to live a healthy, balanced lifestyle, now mainly suffers with fatigue and 'brain fog', and he has learnt to rest when he needs to.

"If you just met me you wouldn't know I had MS just to look at me. I feel very fortunate that I'm able to walk. It's a shame it takes the threat of your health being taken away to really appreciate it.

"When your illness is invisible this can make it hard for other people, even your loved ones, to understand the impact. It has an effect on your nearest and dearest too – my wife Katie has to pick up the slack when I'm not well.

"I often can manage working full time, and the children, but something has to give and it's my social life. It's a shame but that's just the way it is.

"I just want to get the message out there that life after MS is possible, and a fulfilling one."