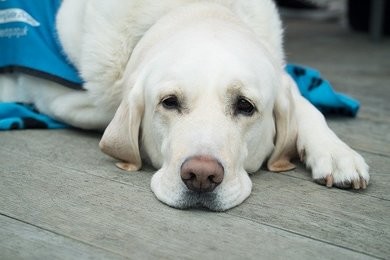 A support dog has transformed John Newcombe’s life by ensuring he continues to enjoy independence and has the confidence to get out and about. John and partner Claire tell Fiona Finch about the amazing, but little-known, Support Dogs charity.

Former soldier John Newcombe was once so fit he ran from Bosnia to Britain to raise funds for the Children in Need charity.

In an unexpected twist of fate, his life too is now being helped by a charity - the Support Dogs charity.

Enter Casper the wonder dog....a wonder because he has helped transform former soldier John’s life and given him back some of the independence he has lost to multiple sclerosis.

The 56-year-old is now wheelchair-bound and Casper is the second support dog who has helped him to continue to get out and about and retain his precious independence.

The former Staff Sergeant said: “I believe in taking the t out of can’t.”

Casper has also given John’s partner Claire Corner peace of mind. She knows if John, a father-of-three and grandfather to four, needs any help Casper will raise the alarm.

Meanwhile Casper helps in all sorts of ways...he has been trained to open and close doors at their home in Cottam, Preston, will tidy up and even load and unload the washing machine.

Claire said: “We’ve had him about 18 months ... he qualified in (the) April and they graduated in November. It’s quite a long process.”

For many years the couple, who met when John was stationed in Lancashire, lived in Kent. Three years ago they moved back to Claire’s home county after searching for a home which could be adapted to John’s mobility needs and would be suitable for a support dog.

He said: “Claire was a bit of a wizard at finding things on the internet. She found that support dogs are trained as disability assistance dogs.”

They had hoped their pet dog Teddy could be trained, but because Teddy had arthritis in his knees he was deemed unsuitable.

Their first support dog in Kent was Blue who joined them for five years. But Blue had to be retired after he was attacked by three dogs and lost his confidence.

If John drops something out of bed at night Casper will pick it up for him. He can take John’s coat off, pull trousers and socks off and fetch shoes. Claire, a former deputy head, said; “As we see these little stumbling blocks with John, especially as his disease progresses, we’ve had to think up new tricks. John started to slump over in a chair on one side and we thought how can we ride this out? What can we do to help John, especially if I am not here?”

They trained Casper, with the help of his treat biscuits, to “pull” to order .

After two or three attempts Casper understood and will now come and tug at John’s clothes to straighten his position. John said: “He’s very clever.”

The two work so well together they earned a special award last year - Support Dogs declared them “Partnership of The Year.”

The Support Dogs charity trains dogs to help in different ways and training continues at home.

• Autism Assistance Dogs for children with autism. These are trained to provide safety for a child and reduce stress in social environments.

•Seizure Alert Dogs for people wit epilepsy. These provide a 100 per cent reliable up to 50 minute prior warning before the onset of an epileptic seizure. This gives the person at risk the chance to find a place of safety and be more in control of their seizure, which in turn allows them to lead a more independent life.

• Disability Assistance Dogs like Casper help people with physical disabilities. The client’s own pet dog is trained to perform tasks tailored to their needs, again ensuring they enjoy greater independence and safety.

Support Dogs was established in 1992 and works across England, Scotland and Wales. The Sheffield-based charity relies solely on voluntary donations. See www.supportdogs.org.uk