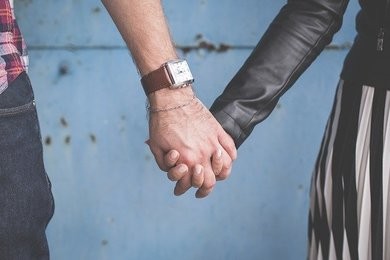 A WITNEY man who reignited his friendship with his childhood sweetheart only to end up caring for her through a degenerative illness for the next 20 years has spoken out about the lack of support full-time carers receive once their loved one dies.

Richard Wastie, 53, started caring for Lesley Hall when he found out that she had Huntington’s disease in 2005.

After surviving two decades, she died in August last year, and Mr Wastie feels he has been ‘slung on the scrapheap’.

After dating for four years as teenagers, the couple split up and went through marriages which both ended in divorce.

Mr Wastie explained: "Lesley was my first girlfriend and when we split up, we then didn’t see each other for 21 years.

"She got married and had a child but split from her husband before the diagnosis."

In 2005, Mr Wastie bumped into Miss Hall’s mother in Witney, who told him that she had Huntington’s and that it was terminal.

He said: "I wrote a letter to Lesley’s mother saying I would do whatever I could to help.

“Lesley ended up inviting me for a drink but couldn’t get a babysitter so instead I went to hers and we watched the X Factor.

“She told me about the care she was getting and that her son was ultimately caring for her at six years old."

Huntington's disease is a condition that stops parts of the brain working properly over time.

It is genetically inherited from a person's parents.

Symptoms can include difficulty concentrating and memory lapses, depression, stumbling and clumsiness, involuntary jerking or fidgety movements and even personality changes.

It is usually fatal about 15 or 20 years after the symptoms start, and the NHS says that full-time nursing care is needed in the later stages of the condition.

When Mr Wastie reunited with Miss Hall in 2005 she was just 35, but already having trouble moving, especially getting up and down stairs in her house.

He said: "She needed a bungalow or to have a carer so I secured a mortgage on a bungalow for her and her son.

“I just wanted her to have the right environment for her to go forward."

Miss Hall’s condition began to worsen and things came to a head when she burnt her arms after trying to cook her son’s dinner one evening.

Mr Wastie said: “It was then that I offered to cook all evening meals in order to help out.

“She’d been falling over in the daytime due to her balance and had to have her food cut really small because she found swallowing so difficult.”

Miss Hall received help from The Huntington’s Disease Association however Mr Wastie said this was not enough.

He said: “The charity just didn’t have the manpower for the care that she needed in the bungalow.

“Therefore the choice was for Lesley to go into a home and her son live with a member of the family or I step in to do something.”

It was then that Mr Wastie offered to Oxfordshire County Council that he become Miss Hall’s full-time carer, which meant he received money from the authority to help cover the costs.

He said: “Initially I wanted for them to have someone to look after her as I knew it was a huge commitment.

“However once I made the decision I had to carry it through.

“The extension needed to be done and the bungalow needed a wet room but I bit the bullet and took on the job.”

“I gave up my flat and my career and moved in with Lesley: I packed up my life to do what I thought was a noble thing.

“I gave her everything and looked after her.”

Mr Wastie said the couple continued to have a platonic relationship, sleeping in separate rooms, but pointed out that if they had been married they would not have got the same allowance from the council.

That is because under current law, spouses are not paid to look after their partner – something Mr Wastie said should change.

“They don’t pay a spouse to look after their partner – they pay an agency but not a spouse,” he said.

“It meant we could never get married even if we wanted to.”

Mr Wastie cared for Miss Hall for 14 years and said he had tried to give her a new lease on life.

“We used to go on holiday all the time as she loved her holidays.

“She worried nobody would ever take her on holiday again but I told her I would and we went to all sorts of places – Land’s End, Loch Ness, Spain, Greece – loads of places.

“She couldn’t fly, though, so I would drive us there.

“To get to our favourite destination in Spain, I would drive to Dover, then to Calais, through France and the Pyrenees and into Girona in northern Spain.

“From there we went to Barcelona, then the Mediterranean motorway as they call it, until we got to Costa Del Sol and Xàbia.”

s Miss Hall’s condition began to worsen, the pair were struck with further devastation when she was diagnosed with Non-Hodgkin lymphoma – a type of cancer – in June 2016.

Mr Wastie said: “Lesley was distraught. We were due to go to Spain but instead she had to go into hospital.

“The doctors said at first that it wasn’t aggressive, but it was terminal.

“She had a procedure which drained two-and-a-half litres of fluid off her lungs and I was there with her the whole time.

“It got to the point where she wasn’t even enjoying her holidays anymore and that was hard to take.

“You could’ve taken her to the Grand Canyon and she wouldn’t have been inspired, which wasn’t like Lesley at all.

“I just couldn’t believe that she could get this as well, it wasn’t fair.

“By this point Lesley was so dependent on me and we were getting through it together.

“It eventually got to the point where communication got harder between us and she required 24/7 care.

“Things then started getting really bad in the summer of 2017.

“I took on a role with an agency to help with Lesley’s care.

“By the end though, she needed the end-of-life care but there was just no [extra] funding to help me.

“I wasn’t sleeping properly and I was on antidepressants - it was a lot of hard work for one person.”

Miss Hall died in her sleep in August after contracting bronchial pneumonia.

Mr Wastie said: “At least she died at home which is what I had promised her.”

Since her passing, Mr Wastie said that he had not received any support from any of the organisations involved in her care.

He also said that relations with her family had deteriorated, including Miss Hall's mother and her son.

Now he says more must be done to help carers in his position.

He said: “I’ve lost Lesley, I’m jobless and now I risk losing the house because the mortgage is in her name – I feel like I’ve been chucked on the scrapheap."

Mr Wasite said he had hoped he might be able to get a job with the agency involved in Lesley’s care, but this never happened.

He went on: “Patients and clients come first in every situation, however they need to to look after the people who are caring for others.

“I was doing a job that three or four people would be doing and they just let you get on with it.

“It’s the most testing job you can do and there’s no support afterwards – local government can only do so much, but this comes down to central government."

He added: "The government must be saving millions through all the people like me, who are doing the jobs of carer themselves."

One of the organisations that helped Mr Wastie with Miss Hall's care was West Oxfordshire District Council.

A spokesperson for that authority said it would do 'all it could' to advise residents on managing a difficult situation such as living with caring responsibilities or the death of someone close to them.

They went on: “Practically speaking, our area of expertise is that of benefits, and we have a specialist team of advisors and subject experts who are trained to help residents navigate the benefits system and make sure they are claiming any financial support they are eligible for, in particular, council tax support.

“We will also help to signpost people to other agencies or partner organisations if support is required in other areas.”

An NHS England spokesperson said GPs could always put people in touch with bereavement counsellors, but admitted it was a 'particularly difficult time for carers' when no specific help was automatically granted.

They went on: “When someone dies family members are often offered access to bereavement services, this includes practical advice and support on collecting death certificates, how to register a death, collecting personal belongings and signposting to local bereavement support or counselling.

"GPs can put people in touch with a local bereavement counsellor if they feel one-to-one counselling would be helpful and the charity Cruse Bereavement Care also offers support, advice and information."

Despite his current situation, Mr Wastie maintains that he would not change what he did.

He said: “I’m glad that I was there for her and could make her happy.

“She survived 15 years after only being given ten, and even with the cancer she still went on.

“I was in awe of her, whatever life threw at her she always had a smile on her face.

“She was my best friend, the relationship was entirely platonic but I loved her to bits.”