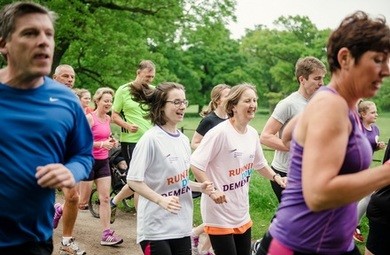 Runners from all walks of life from across the UK have tackled parkruns and virtual running challenges to raise the large sum.

The figure is enough to keep the entire Alzheimer’s Research UK Research Network running for two years. The network brings 2,000 dementia researchers from 46 universities together to share ideas and resources to make breakthroughs faster.

The seven-figure sum raised is the result of parkrun UK’s partnership with the charity which began in 2015.

Its biggest campaign ‘Running Down Dementia’ is a virtual running event, which challenges people to run 100km or more over the summer. In four years the campaign has raised over £1 million.

The success of the Donate Your Time and Give It Your Best campaigns involved parkrunners converting their finish times in minutes and seconds into pounds and pence and donating it, has also contributed to the £1.5m milestone – raising £150,000 since 2015.

Many parkrunners have taken on personal challenges to raise money for Alzheimer’s Research UK, including parkrun founder Paul Sinton-Hewitt, who ran the Virgin Money London Marathon in 2016 and raised over £21,000.

Ian Wilson, chief executive of Alzheimer’s Research UK, said: “We are incredibly grateful that so many parkrunners have got behind our cause, many of whom are motivated to support us because they have seen loved ones affected by dementia.

'I had to witness her slowly drift away from me'

Andy Morris, Poolsbrook parkrun event director has taken on Running Down Dementia three times and raised over £6,500 for research in honour of his mum.

Andy Morris said: “My mum died with vascular dementia in 2017. I had to witness her slowly drift away from me as she lost her memories and personality.

“It was running that helped me cope with what was happening to my family, so it’s been great to be able to combine that with supporting Alzheimer’s Research UK. It’s so good to feel I’m making a difference and providing hope that future generations won’t have to go through what my family went through.”

More than half of UK adults know someone with dementia and it is the country’s leading cause of death.

The chief executive of Alzheimer's Research added: "Today, there are no effective treatments to slow, stop or prevent diseases that cause dementia, such as Alzheimer’s. But thanks to our amazing supporters, there are now more researchers than ever working to change that."

The chief executive praised parkrunners "continued efforts to raise awareness of dementia, particularly spreading the message that people can reduce their risk of dementia by being physically active.”

You can join parkrun, apply for charity places in events and see fundraising and volunteering opportunities by visiting www.alzheimersresearchuk.org/parkrun