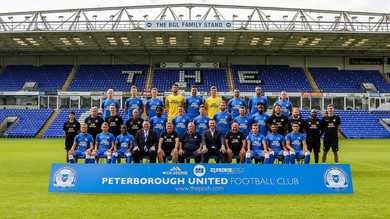 The growing scheme – which is already supported by 40 businesses in the city – works towards a common goal of supporting people with dementia to remain independent and part of their community for as long as possible.

Any organisation can join the initiative which starts by agreeing to simple actions such as making colleagues Dementia Friends and assessing a workplace to improve access and experience for customer with dementia.

Bob Symns, club chief executive, said: “We’re already playing our part in helping to understand what life for people living with dementia might be like. My colleagues and I at the club all recently became Dementia Friends and now we will look to encourage the players both in the first team and academy to do the same.

“It is important to us as we continue our charity of the year partnership with Alzheimer’s Society that we lay the foundations to continue being accessible and understanding to the challenges our supporters and employees affected by dementia may be facing.”

Posh made the commitment at the Alzheimer’s Society’s first 2020 Dementia Friends Conference, held at the Weston Homes Stadium in London Road, where both Dementia Friends Champions and representatives from Dementia Friendly Communities across central England came together to celebrate their achievements, share knowledge and hear first-hand experiences from people living with dementia.

Karon Walton, chair of the Peterborough Dementia Friendly Community, welcomed the club’s long-term commitment to supporting people affected by dementia in the city.

She said: “Dementia Friendly communities aim to show how, by finding out more about dementia and by making small changes, everyone can share responsibility for ensuring that people with dementia feel understood, valued and able to contribute to the community where they live.

“The football club is in the heart of the city and many of its thousands of supporters will be affected by the condition in some way.

“In the next decade the number of people expected to be living with dementia in Peterborough is estimated to rise by more than 850, yet too many still face the condition alone.

“The club has joined a growing movement where more than three million people are now Dementia Friends across the UK, alongside nearly 500 Dementia Friendly communities.

“We’re always looking for business and groups across Peterborough to join the initiative. To find out more, email karon.walton@hegarty.co.uk.”

To find out how to become a Dementia Friend, visit dementiafriends.org.uk and for information about how to make your neighbourhood, village, town or city more dementia friendly, visit alzheimers.org.uk/get-involved.