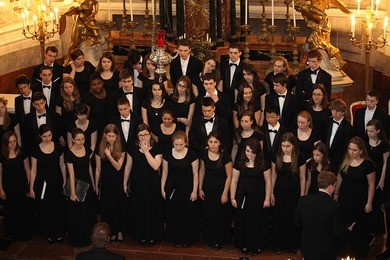 By Harriet Evans – Express and Star

Counterpoint Choir has been fundraising for a number of charities such as Teenage Cancer Trust, Kidney Research, Seasons Theatre Company and Steve Bull's Promise Dreams, for more than two years and in that short time have collected £10,000.

The choir is now taking part in a charity event for Sepsis UK with hopes of raising thousands for the cause.

Elaine Buckland, leader of the choir, said: "I was approached by a good friend Andrew Smith his daughter, Amy Lou who I taught to sing, nearly died a couple of years ago due to Sepsis hence the link.

"She has a fabulous voice and will also be performing in the show along with Jacqueline Faye, an X Factor finalist, a Take That Tribute band, local comedian Gary Pownland, Marc Bolton and many more acts.

"Our choir will be performing a few of my own arrangements, a Queen medley, Greatest Showman medley, a classical piece, Proud Mary and others; it's a real mix.

The event will be held at Allens Sports and Social Club in Tipton on Sunday, February 23 from 1pm to 6pm with non-stop entertainment throughout the day.

Counterpoint Choir isn't planning to stop their fundraising triumphs anytime soon and they are also in the process of preparing for their own fundraiser in aid of the Make a Wish Foundation at Chancellors Hall, Wolverhampton University on Saturday, September 26.