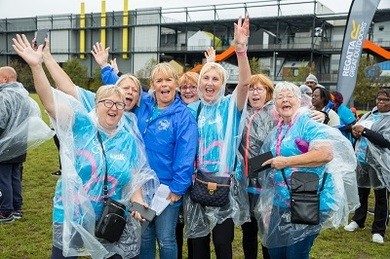 Birds of a Feather star Linda Robson issued an emotional call to Alzheimer’s Society fundraisers at the charity’s London Memory Walk on Sunday.

Inspired by her personal family experience of dementia, Linda defied inclement weather to take her place among a sea of people who converged on Queen Elizabeth Olympic Park for Alzheimer’s Society’s Memory Walk.

The Loose Women panelist got them on their way by cutting the ribbon at the Memory Walk start-line along with fellow Londoner Dianne Campbell who is living with dementia – but only after taking to the stage to deliver a poignant speech to their hundreds of fellow fundraisers.

Linda’s mother, Rita, died of cancer at the age of 75 in August 2012, after living with dementia for several years, and since then Linda has been a passionate supporter of Alzheimer’s Society’s flagship Memory Walk, fundraising campaign.

Linda said: “I wouldn’t miss the London Memory Walk for the world because it’s really close to my heart.

“I’ve taken part in the last five walks. My own reason for wanting to help Alzheimer’s Society make a difference is because of my late mum, who was living with dementia when she died.

“When we first noticed something was wrong she had just lost her partner so we were convinced it was just down to depression. But then we realised that slowly but surely, on a daily basis, she was getting worse, and we soon discovered that was down to dementia.

“Everyone taking part in Memory Walk has, like me, either lost someone because of dementia or a friend or loved one is living with it at the moment, and we all know how hard that can be.

“Dementia is now the UK’s biggest killer with someone developing it every three minutes – yet dementia research still trails behind other health conditions after decades of under-funding, and that’s why Memory Walk is so important.”

In the hour-and-a-half it takes to complete an average Memory Walk, 30 people will develop dementia in the UK. Alzheimer’s Society is committed to spending at least £150 million over the next decade on dementia research to improve care and find a cure.

Linda was joined at the start line by Dianne and she also spoke from the Memory Walk stage.

Dianne, from Brent, saw her life transformed in 2013 when she received her dementia diagnosis. Like many people diagnosed with young-onset dementia, Dianne found a lack of age-appropriate services in her area. 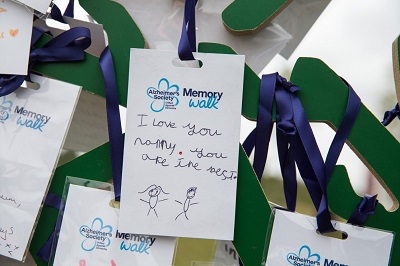 Although her occupational therapist was in Brent, north-west London, she had to travel to the city centre to attend a group for younger people with dementia at the Kensington and Chelsea and Westminster Memory Service.

Dianne, who was made redundant shortly after her diagnosis, was able to join a team of dementia support workers in a paid role, to help support other people in adjusting with their diagnosis, alongside their nurse or psychologist.

Dianne supports Alzheimer’s Society through its Dementia Voice activities in which
people affected by dementia uses their experiences and views to shape and influence the charity’s work. She also volunteers with Brent Dementia Action Alliance, sitting on their board to advise on the realities of life for people with dementia.

“Families like Linda and Dianne’’s are being cruelly torn apart by dementia, and we urgently need more funding to help us find a cure so others no longer have to face its heart-breaking impact.

“Until the day we beat dementia our researchers are working tirelessly to find ways to make quality of life better for people living with dementia in the UK and their carers too.

“That’s why we need people everywhere to follow Linda and Dianne’s lead, and sign up now to take part in one of our night-time Glow Walks taking place nationwide in March.”

To register for an Alzheimer’s Society Glow Walk, go to: memorywalk.org.uk