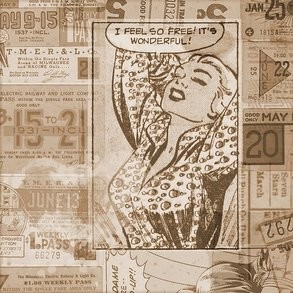 Comic book aims to help people with dementia use transport without fear.

Comic book aims to help people with dementia use transport without fear.

Trying to navigate travel as someone living with dementia can be debilitating, leading to isolation, lack of confidence and even depression.

But now a pioneering project is creating comics that will help people working in and planning Scotland's transport system to better understand and improve the travelling experience for people living with the condition.

Drawing from Experience pairs graphic artist students from Dundee University with people living with dementia to co-create the literature which will be shared via the Dementia Services Development Trust, who funded the project.

Andy Hyde runs Go Upstream, an initiative supported by Life Changes Trust to work with people affected by dementia on a range of issues to do with transport. He created Drawing from Experience after hearing of the difficulties that people face trying to continue living in and enjoying their cities and towns.

He said: "We wanted to grow this idea of bringing together people with dementia and service providers along journeys to try and think about the real challenges of getting out and about.

"Through that work we discovered that we tend to think about transport when we think about journeys - so we think about vehicles and timetables and tickets. But there are lots of parts of journeys that aren't really to do with transport. It's sometimes those little bits in between. It might be buying your ticket, or getting to the bus stop or the noise of the railway station. Those are the parts of the journey we don't think about that much."

Mr Hyde points out that people living with dementia don't only experience memory loss but loss of confidence in their own abilities and in their environment.

He said: "A lot of us think about dementia as a memory issue but there are many, many things around it including sensory stuff such as light levels and speed, and mobility.

"Actually the impact of those experiences that can be a real challenge for many people. So,we can all feel frustrated or confused or anxious on a journey but we can navigate around those things. But for people with dementia it might really knock their confidence and they might not take that journey again."

Trying to translate those emotional experiences and relay them to people who can offer help inspired the project which was thought up when Andy was speaking to his daughter about comics and graphic novels.

He said: "It dawned on me that this could be a format we could use because of the way it is created. The number of words beside the panel and the style of the artwork can really get emotions across."

He said: "The idea was if artists got together with people with dementia and took a journey together because only then can you really see what the issues are. Could we collaboratively develop artwork that would truly represent somebody's experience so they would look at it and say, yeah, that's how I felt."

The concept of the comic was conceived to help people make journeys, some even as short as from their front door to their street, but Mr Hyde sees its potential to help many different situations.

He said: "There are so many opportunities here to do tailored parts of the service. What we've done here is just show what is possible."

The comics were sent to small groups of people so they could see the artwork as it was developing which helped Mr Hyde and the artists work out what kind of images and type were accessible.
Because some reviewers expressed issues with colour, it was too "vivid", the comics will be produced in both colour and black and white.

Mr Hyde said: "It became as much an accessiblity thing as it was a storytelling thing, which was a really interesting outcome."
It is hoped the training materials will not only help people living with dementia, but also the people providing the services, as well as others living in care homes.

Mr Hyde said: "We're trying to say this is about everybody. There'll be a range of accessibility needs in staff as well as much as people using the services. The service that people are providing, this is like a community service - you're providing social connection and keeping people active.

"People have a right and a desire to continue to remain part of their community whether they have a diagnosis of dementia or not. It's about raising awareness not only about the condition but also the role that everybody has to play in keeping us all active."

With so much scope to produce training materials for other services and user groups, Mr Hyde sees limitless potential in the comic format.

He said: "This is about working with people to make the world better for everybody because we all benefit from it. It's just that we're working with people with dementia to look at it through quite a complex lens but actually what we're doing is making real the problems and anxieties that a lot of people have."