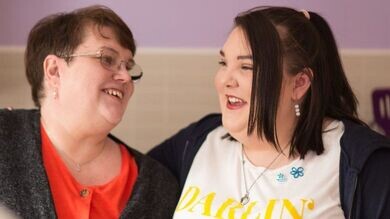 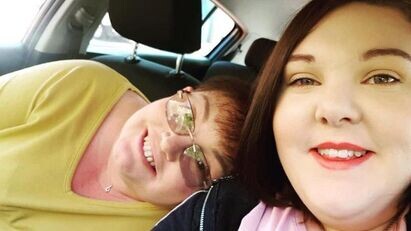 Amanda Quinn, who has early onset dementia, is cared for by her 23-year-old daughter Bethany

"It feels like you're being punished for something you didn't do."

Two years ago, she was diagnosed with the condition aged 49, and said the disease was a "ticking time bomb" for her husband and four children.

Since her diagnosis, Amanda says she has lost her sense of what day it is, her concentration, and she struggles with speech occasionally and suffers more with incontinence.

When Wales went into a UK national lockdown on 23 March, Amanda said she did not leave her home in Treorchy, Rhondda Cynon Taf, for weeks.

She said her children have noticed a "big change" in her.

"I used to have a wicked sense of humour - I still have one, but it's not how I used to be," she said.

But for Amanda one of the worst parts of her condition is "losing so many friends" whom she said "would rather cross the road" than talk to her.

"They don't know how to interact with me anymore," she said. 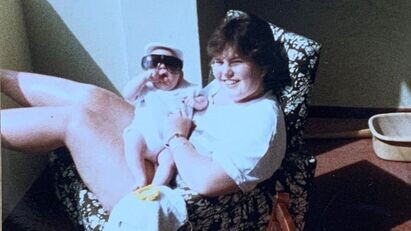 Her 23-year-old daughter Bethany Kingsley, who cares for her, said the pandemic has caused caring work to increase ten-fold.

"I have to keep an eye on mum a lot more now, because she doesn't know what to do with herself.

"But I have also got to look after my mental health side of it as well. There are days where I'm struggling," she said.

Now Amanda does activities at home such as adult colouring books, baking with Bethany, and watches movies.

"My daughter says it's like we've switched roles and she has become the adult as she holds my hand when we cross the road.

"Although I can see a car, it doesn't register to me that it is not safe to walk out, all I can think is that I need to be on the other side of the road."

Before the pandemic, she attended dementia support groups in person, such as Memoria, a theatrical group of people with dementia and carers, whereas now she does this virtually. 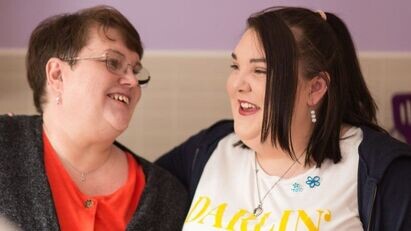 Last year, before the pandemic, Bethany put off moving away to study midwifery at university in Bristol.

Although she said it was a "difficult" decision as she had wanted to do it for years, she said she was glad she was home to care for her mother during the pandemic.

Instead she chose to study for an Open University course in health and social care from home.

"I thought my mother is the only person I've got at the end of the day and I would rather make sure she is safe and happy, rather than go off and leave her," she said.

But Amanda said she was concerned about how her condition will progress and affect her family more.

The 51-year-old said it was "not fair" that her daughter had to stay home because of her condition.

"It worries me how it will affect my children. I'm fortunate, I suppose, that I'm not going to know.

"I say I don't want to go into a care home but that wouldn't be fair on them - they have still got their whole lives to lead". 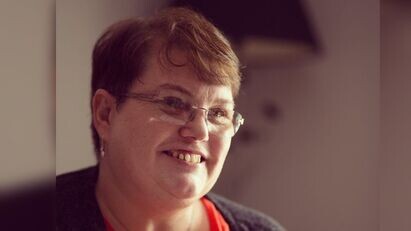 Amanda was still in her 40s when she was diagnosed

Alzheimer's Society Cymru support adviser for younger people Lorraine Davies said there was a stigma attached to younger people with the disease and a "lack of public awareness".

"Some have mortgages, some have young families, and often they also care for older adults - so it has a different impact on them, and their social network of people.

"A lot of people living with dementia don't always feel they will have next year, so 2020 has been a great sense of loss to them because of the lockdown and restrictions," she said.

The charity estimates that there are between 2,000 to 3,000 people with young onset dementia in Wales, according to 2018 figures from the first Welsh Government national dementia action plan.

However Lorraine said the figure was likely to be higher as getting a dementia diagnosis can be harder for younger people, and can take more than a year to have it confirmed.

"It is also more common for younger people to have rarer forms of dementia, so rather than being a typical Alzheimer's disease, associated with memory loss, a patient might have behavioural changes, but you might just think they are upset, stressed, or put it down to mood swings.

"Some people have been accused of being drunk, because they have slurred speech, but actually that is a symptom."

She said the Alzheimer's Society has organised virtual support groups for people with the condition and their carers during lockdown.

"Often younger people want to meet people like them, because it helps them not to feel so alone in this. Knowing that brings people comfort."

Simon Hatch, the director of Carers Trust Wales, said the pandemic had highlighted the "crucial role unpaid carers play both in providing exceptional, expert care to family and friends".

Mr Hatch said the trust found that 44% of young adult carers it spoke to felt overwhelmed by the pressures they were facing.

He said although there was support available to carers they would need "sustainable" forms of this in the future.

What is early onset dementia?

There are about 45,000 people with dementia in Wales, according to the Alzheimer's Society.

The disease is considered "early onset" when it affects people under 65, according to Young Dementia UK.

Lorraine said the age distinction was made to mark the difference in financial support, as 65 was state pension age at the time.

Dementia itself refers to a set of symptoms caused by many diseases of the brain. The most common symptom is memory loss and difficulty concentrating.

Other symptoms can include struggling to remember recent events, changes to behaviour, mood, becoming lost in familiar places or being unable to find the right word in a conversation.

Specific symptoms will depend on the parts of the brain that are damaged and the disease that is causing the dementia.