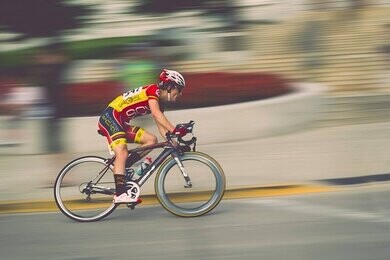 A team of Norwich cyclists will push themselves to ride the equivalent of Mount Everest five times to support Dementia UK.

A group of five from the Strada 2020 cycling team will individually try to climb 29,030 feet from the comfort of their own home using a stationary smart trainer bike.

The bike is programmed using Zwift software, which will monitor their time, distance and elevation as the aim to complete the famouse Alpe D’Huez climb, eight times, to replicate climbing Mount Everest.

They will begin the cycle at 8am on Saturday, May 23, with the aim to complete the challenge in between 11 to 13 hours.

Sam said: “As we aren’t able to race outside due to the current Covid-19 situation we wanted a challenge we could complete inside and adhere social distancing rules. The concept of an ‘vEverest’ is that the rider rides up and down the same hill until they’ve reached the same elevation of Mount Everest. It’s an extremely difficult task which a small amount of cyclists have completed.

“One of the members lost his father to early onset Alzheimer’s and so it’s a charity we thought we could make a difference.”

The Strada team compete locally, regionally and nationally but despite experience, Sam said it will be a challenge for most of the team.

The 25-year-old added: “We have had to adjust our training as a result of Covid-19, the road race season has been delayed and so we have been training in preparation for the season.

“Most of the riders have already ridden the Alpe Du Zwift once or twice to get an idea for timing and effort and have started to realise the severity of the challenge ahead.

Read more: ‘A massive thank you’ - More than 100 sets of scrubs donated to hospital paediatric staff

“One of the major obstacles to overcome is the duration of the challenge, ensuring that we stay comfortable, focused and fuelling for the challenge will be important.

“Overheating can be a major issue on stationary trainers and so maintaining an optimal temperature will ensure that we are able to continue to put power down with a relatively low heart rate.”

To donate to their challenge visit https://www.justgiving.com/fundraising/stradasendit