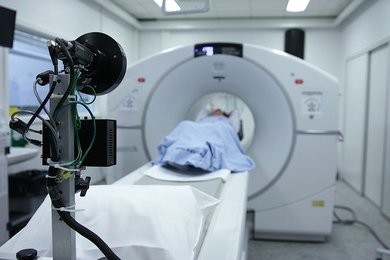 A cancer scanner could be used to identify some of the earliest and most difficult to diagnose forms of dementia, scientists have said.

Doctors at University Hospital of Wales (UHW) in Cardiff said its PET scanner could show signs of the condition in people who are not showing symptoms.

About 47% of people in Wales living with dementia do not have a diagnosis.

The Welsh Government said it is investing £10m a year in its dementia action plan.

A pilot has been taking place across the Aneurin Bevan University Health Board (ABUHB) over the past few months for patients who are suspected of having dementia.

Prof Chris Marshall, director of Wales Research and Diagnostic PET Imaging Centre said he hopes the scanner could "give a diagnosis much earlier than the disease's progression".

Dr Chineze Ivenso, chair of the old age faculty at the Royal College of Psychiatrists in Wales, said the country was the only part of the UK which does not test in this way.

"When it comes to diagnosing dementia, Wales has been lagging behind for some time," she said.

In Wales 47% of people living with dementia are undiagnosed, compared to 34% in the rest of the UK.

Dr Ivenso said the machine was also capable of spotting signs of dementia in people who hadn't yet experienced symptoms, although dementia screening was not currently recommended by NICE.

"Having dementia means that you have plaques in your brain that shouldn't be there. Sometimes early on, if these plaques start developing in the brain than the PET scanner can pick that up. That person may have some signs of the disease developing without the symptoms yet beginning to present."

The Welsh Government said: "We recognise the importance of timely diagnosis of dementia in helping to manage the condition. We are investing £10m a year to support our dementia action plan, which includes projects across Wales to improve diagnosis rates."

It said Public Health Wales was working with GPs and memory assessment services to improve diagnosis.