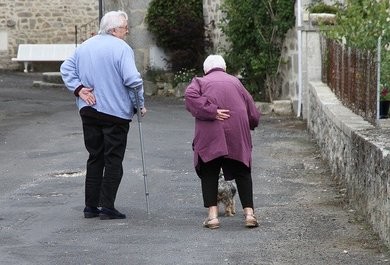 The percentage of people suffering from dementia in Britain is set to increase from 1.6% to 2.7% by 2050, according to a report by Alzheimer Europe which reviewed 16 population studies

Dementia cases in Britain are set to double to two million by 2050, new estimates show.

The dementia time bomb is revealed in the largest ever projection across Europe which will also see cases double, placing a huge burden on health systems.

Increasing numbers of elderly people on the continent will see 19 million people living with the devastating disease by 2050, compared to less than 10 million now.

In Britain, the percentage of people with the devastating condition will increase from 1.6% to 2.7%. It comes as the number of Brits aged over 85 will more than double.

People living with the devastating diagnosis will soar from one to two million by 2050, according to the report from Alzheimer Europe.

Mr Jean Georges, executive director of Alzheimer Europe, said: “Our report also demonstrates the number of people living with the condition is set to increase substantially in the years ahead.

“This will only place greater pressure on care and support services unless better ways of treating and preventing dementia are identified.”

This new report comes more than six years after the last study of its kind. It reviewed 16 population studies to calculate the number of people set to be living with dementia in the EU’s 27 member countries and ten others across the continent.

There is currently no cure for any form of dementia which causes one in every eight UK deaths.

Twice as many women suffer from dementia than men.

Experts estimate that as lifestyles change, and more people are made aware of the disease, its “prevalence” will fall.

This means that the average person is less likely to develop dementia at a given age, though may still develop it later in life.

However as the population increases and is on average older across Europe, the total number of people with the condition will drastically increase.

Samantha Benham-Hermetz, director of policy and public Affairs at Alzheimer’s Research UK, said: “These startling figures emphasise the looming global health crisis of dementia, but sadly they come as no surprise.

“If we are unable to find ways to prevent or treat the diseases that cause dementia, one in three people born today will develop dementia in their lifetimes.

“We must act now, and invest more than ever before in dementia research, to stop these projections from becoming a reality.”

Previous research suggests the economic cost of caring for patients in the UK will increase dramatically from £23.6 billion in 2014 to £59.4 billion by 2050.

Part of this cost is due to Brits having to give up work to care for a loved one every day for decades, with Alzheimer’s Research UK estimating that 1 million more people will need to become carers by 2050.

The Mirror has launched the Fair Care for All campaign calling for action to tackle the social care crisis after a decade of underfunding.

“We believe only free universal care, funded like schools and the NHS, will provide people with dementia the dignity, security and fundamental care they deserve now and in the future.”

The study mainly focused on people aged over 65 with the condition, rather than those with “early onset”, for which there is little data.