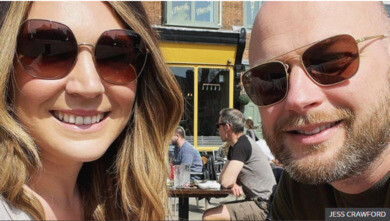 Dementia: 'I just wanted to know if I would get it' 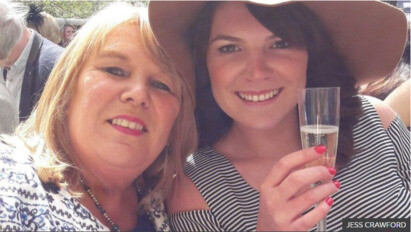 Before she had even turned 30, Jess Crawford learned she was destined to develop a rare, hereditary form of dementia. Despite watching her mum deteriorate with the same condition, she says getting the diagnosis this year has given her a "refreshed approach on life".

Jess Crawford can't remember the last conversation she had with her mum, Janice Pick.

For the last six years Jess has watched the 64-year-old go from the "life and soul of the party" to being unable to talk.

"She's still alive but I can't remember her voice anymore," she says.

Jess, from Beverley, near Hull, became concerned when her mum starting showing changes in her behaviour and personality.

"She became less empathetic towards people, so she would say and do things that wasn't like her. She came across quite nasty, quite mean," she says.

Janice, whose father had died with dementia, refused to go to the doctors, telling her daughter she would rather not know if she had it too. She started to miss days at work. After one absence, she texted her daughter, saying: "I forgot to go to work today, ha ha".

After this, Jess "removed the filter" and confronted her mum, replying: "That's not funny, we need to go to the doctors, you're forgetting too much".

"The next day she said OK and agreed to go the doctors, and that was the start of getting the diagnosis," Jess says. 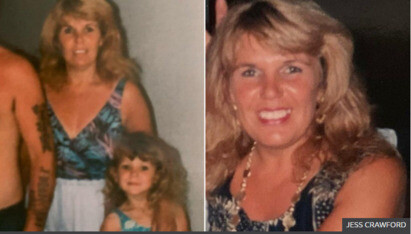 When it finally came in February 2019, it was "a relief" to have a name for her mum's condition - frontotemporal dementia (FTD).

Janice now lives in a care home in Hull, where she receives round-the-clock care for FTD - a rare form of dementia caused by a mutated gene which develops when nerves in the frontal and temporal lobes of the brain die.

It is also hereditary, and can be passed from parent to child. About one in eight people with the condition have a genetic link. It is usually diagnosed in people aged between 45 and 65, but tests are available to relatives who want to know if they carry the gene.

'Not that big a deal'

Jess says it was the "first thing" she wanted to do and to find out if she, like her mum, would also develop the condition, took the test earlier this year.

In a video she made about getting her results, Jess talks about feeling anxious and struggling to sleep the night before, but also about having a "pragmatic" outlook. "The more I think about it, it's not

that big of a deal. We're all going to die, we just don't know how. I just feel like I have an advantage," she says.

The test came back positive. Jess recalls being "on a high" when the doctor told her.

"I was so full of adrenalin. I was smiling that the journey was over - after a little cry," she says. "It was a really daunting prospect because FTD at the moment has no cure and absolutely no treatment. It wasn't a case of me having a higher chance of developing it, it was more a matter of when." 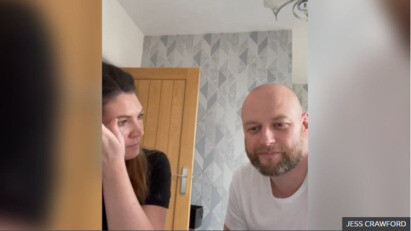 Jess and her husband Gregg had been planning to have a child, but she says watching her own mother change in front of her eyes, and her diagnosis had thrown a spanner in the works of her family plans.

"I either try for a baby and run the risk of passing the gene on and hopefully there'll be some treatment or cure in 50 years, I go down an IVF route, or I don't have a baby at all. I'm so volatile at the moment which means to me I'm not ready to make the decision. I just want to make sure whatever I do is the right decision, not just for me."

Jess believes she might not show symptoms for another 20 years, allowing her to "live her life". "It made me realise life isn't guaranteed. I don't have borrowed time so I say yes to more and want to experience more," she says. 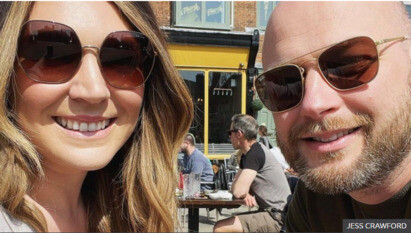 Over the last year, Jess has been writing a blog about looking after her mum and her own diagnosis, hoping to educate people about the condition.

She says blogging, after realising how rare the disease was and not having anyone else to talk to about it, was "the best thing I've ever done". An online community now reads her work and shares stories of living with FTD.

"It feels like a lot of people don't understand FTD, including healthcare professionals," she says. "Nurses read my blog and say it's been very insightful to get more information about the disease itself."

Although there is no known cure, Jess is taking part in clinical trials before she starts showing symptoms.

"It's given me a great sense of hope," she says.

"The more people that get involved, the more chance there is that could help find a cure in the future because that's what's going to make the difference."

Frontotemporal dementia is usually diagnosed in people aged between 45 and 65, developing slowly and gradually getting worse over years