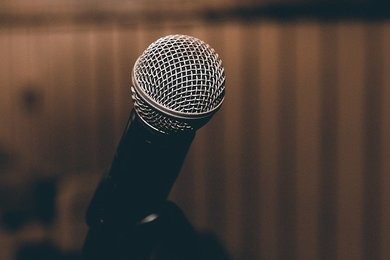 By Caroline Wilson – The Herald

GLASGOW Comedy Festival is to host its first ever dementia-friendly gig after elderly people told a charity that stand-up was ‘inaccessible’ for many.

Lynsey Neilson, Dementia Development Manager of Glasgow’s Golden Generation, which provides a range of services for older people, asked clients and families what they would like to see added to the programme.

Many elderly people said they had enjoyed comedy but felt it was “not always accessible” for older people, particularly those with dementia or restricted mobility.

Gigs tend to be held at night, in dimly lit and licensed basement clubs or venues without lifts, while Lynsey who does stand-up “as a hobby” said routines that feature a lot of audience interaction or swearing may not be suitable for someone with dementia while reactions to certain types of humours might be unpredictable.

The free but ticketed gig, which is now sold out, will be held during the day in the Fred Paton Centre, run by the charity in Glasgow’s West End.

Sets will be kept to a maximum of seven minutes with frequent breaks and the family-friendly comedy won’t feature any swearing or crowd participation. If is hoped the event could become a regular feature.

Compere and warm-up for the gig on March 18 will be Paul McDaniel, who was runner up in the Scottish Comedian of the Year.

He is a graduate of Strathclyde University’s Stand Up course, which helped propel the careers of comedians including Des Clarke.

Paul, who lives in Maryhill but it originally from Northern Ireland, said he is looking forward to the “challenge” of the gig.

He has been doing regular stand-up for around nine years alongside his part-time job at the Association of Chartered Certified Accountants (ACCA).

He said: “Because it’s on at 2pm, it will be much more family friendly, no dark material, no swearing.

“I’m not a cruel comedian so it won’t really be a change for me.

“I talk about relationships and my lack of success at the Edinburgh Fringe. I don’t know much about football!

“I’ve done quite a few charity gigs, I did a show before with a deaf audience and had someone doing sign language.

“My grandmother had dementia and didn’t have anything like this. It’s nice to do something for a good cause.”

Australian researchers carried out a 3-year study, named SMILE, to see if humour could improve the quality of life for 400 people living with dementia.

Results, which were published last year, showed that laughter therapy can have the same effect as taking anti-psychotic medication, with a 20% reduction in anxiety symptoms.

Lynsey, who is studying for a PhD in dementia care, said: “One of the first things I did when I took up this post in May last year was to ask our service users what types of things they wanted us to do.

“Quite a lot of people said they would like to see comedy with their carers. I was quite surprised at home many.

“A lot of comedy club are downstairs, that’s the biggest barrier. It’s dark and also some people are a bit scared of comedians. People with dementia might react differently to what you expect.

“The routines will be kept to 5-10 minutes to keep people engaged with lots of breaks and we won’t be serving alcohol.

““It’s a great opportunity for us, it’s something which interests our service users but that isn’t always accessible to them.”

Glasgow Comedy Festival is running from March 12 - 29. For tickets go to www.glasgowcomedyfestival.com/