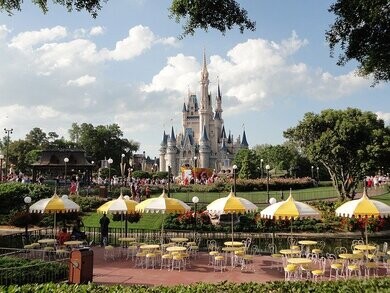 Desperate mum Stacey Reynolds is raising cash for little Skyla-Rae's trip before she loses her sight as she battles the tragic Benjamin Button-style regression caused by Sanfillipo syndrome.

A mum is desperate to give her little girl "a lifetime of fun" before she forgets everything because of a rare childhood dementia.

Skyla-Rae Christine Clegg, five, has been diagnosed with rare Sanfillipo syndrome - a symptom of which is dementia meaning she sometimes can't even recognise her mum, Stacey.

It means Skyla-Rae will soon lose her sight, and eventually forget everything she has learned, in a tragic Benjamin Button-style regression.

But brave mum Stacey Reynolds, 25, is determined to fill her daughter's life with happiness - and is fundraising to take her daughter to Disneyland Paris before she loses her sight.

Stacey, who is Skyla-Rae's full-time carer, said: "Since she was diagnosed in March, her symptoms have progressed a lot and they're worried that it is progressing quicker than they expected.

"She used to be such a happy little child, always saying 'mummy' and 'I love you' and now she can't even say one word - she'll eventually lose her ability to do everything.

"This disease is killing her; she could be gone tomorrow or in six months time but we haven't been given an official age or time it could happen so we try and live every day as if it might be her last."

Skyla-Rae was diagnosed in March with Type 3 Sanfillipo syndrome after initially being diagnosed with late development and autism when she was younger.

The disease, which primarily affects the brain and spinal cord, has led to Skyla-Rae also being diagnosed with childhood dementia, leaving her unable to communicate, walk or swallow food.

Heartbroken mum-of-three Stacey is hoping to raise £5,000 with a Go Fund Me page for the family trip which she is hoping will take place at the end of November.

Skyla-Rae is currently in a wheelchair and on a liquid nutrient diet after the childhood dementia left her unable to remember how to speak, eat and walk - and the five-year-old often suffers from violent outbreaks.

Stacey, from Oldham, Greater Manchester, added: "Some days she will look at me as if wondering who I am which breaks me - it's not something you ever think you will have to face.

"When she was younger, she was just Skyla-Rae to me, she didn't have a label and since being diagnosed she's going downhill so I wish I hadn't found out because maybe things would be different.

"She has no awareness of what's around her.

"She will sometimes have violent outbreaks towards her siblings and I'll have to explain to them that she doesn't mean it and she can't help it but they're children so it's difficult for them to understand."

Skyla-Rae lives at home with her mum and two siblings, Jacob Ellis Peace, six, and one-year-old Sadie-Leigh Tattersall, who struggle to understand her condition.

"She used to be able to walk, communicate, eat and now she's just in a state of living and it's only going to get worse from here," Stacey added.

"We've never been on holiday as a family before so it'll be nice for them all to go away together to their dream destination and spend some quality time together before Skyla-Rae loses her hearing and sight.

"I want her to be able to experience all of the sounds and the sights and enjoy herself one last time."