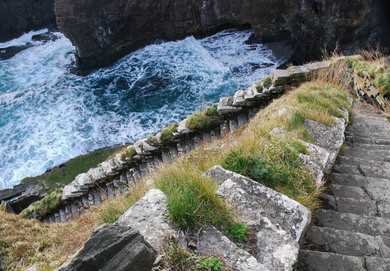 The Penny drops down Whaligoe Steps.

The Penny drops down Whaligoe Steps.

BACK from a sojourn to Orkney on her four-year charity walk around the British Isles, Karen Penny dropped back into Caithness and ventured down a spectacular cliff-face.

As part of her bid to raise awareness of Alzheimer's disease the selfless 55-year-old walked through the county on her way down the east coast and was joined by several well-wishers from BT Thurso.

Hannah Perriewood, service desk manager at BT Thurso, said that as part of a wellbeing at work initiative she joined up with some of her colleagues on a walking challenge.

"The idea was to encourage a healthier lifestyle and not just sit in the house during the darker nights," Hannah said.

"Unfortunately we have a lot of staff whose parents and relatives are suffering with dementia so we got in touch with Alzheimer Scotland who hold walking events to fundraise.

"They didn’t have any events in our area but told us they are celebrating their 40-year anniversary this year."

With that in mind, Hannah and some of her colleagues decided to make their BT Winter Walk in aid of Alzheimer Scotland.

"We currently have 25 staff participating who are all walking 40 miles over 40 days and raising funds for a charity close to a lot of our hearts.

"So far we have racked up more than 500 miles and £500 in sponsorship with two weeks still to go."

While researching the matter, Hannah and her team came across an article on Karen Penny whose goal is to raise £100,000 in four years.

Karen says she is on "the adventure of a lifetime" – a continuous walk circumnavigating the 19,000 miles of the British and Irish coastline, and 20 of the largest islands, in aid of Alzheimer’s Research UK.

She has gone through six pairs of boots and will probably wear out a few more by the time she finishes.

Hannah said: "We were delighted to hear she would be in Caithness, so a few of us and a friend decided to use a volunteer day [a BT benefit allowing staff to take time out to help the community, volunteer or participate in a charity event] and walk with her for eight miles."

Apart from Hannah, the group of women included BT staff Karon Jappy and Angela Barnett and a friend, Moira McBeath, who took photographs along the route.

Hannah said: "We went from Wick to Whaligoe and down and up the steps there. We were very lucky to get a good day as earlier on Tuesday it had been high winds and snow."

Hannah hopes to generate more support for Karen as she "needs company for the long walks and the kindness of the towns she stops in each night".

Karen said she was delighted with the local hospitality and remarked how friendly the Caithness folk were.

She welcomes people to join her for part of the walk or just come and say hello.

Her charity page for donations is www.justgiving.com/Thepennyrollson

The Penny rolls through Caithness