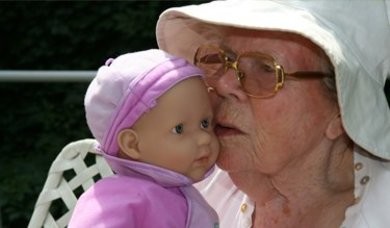 'They remind me of my twins': how lifelike dolls are helping people with dementia.

'They remind me of my twins': how lifelike dolls are helping people with dementia.

By Sarah Johnson – The Guardian

Doll therapy, using toys that appear to breathe and have a heartbeat, is being introduced in care homes and day centres.

Brenda Madden, 94, sits in an armchair in a care home in Abertillery in south Wales, holding a baby doll that appears to breathe and have a heartbeat. She has advanced dementia and can no longer speak, but looks peaceful as she cradles the doll and bends down to kiss it as if it were one of her own children.

“At first it was a bit of a shock,” says her daughter, Sandra. “It was a bit upsetting because she’s gone back in time to when we were kids.” Her brother Barry agrees but can now see the benefits of doll therapy for his mother. “She’s always loved kids. She’s got four children, 11 grandchildren and four or five great-grandchildren. We can see how much she loves [the doll] and we’ve accepted it.”

Dawn Chivers, manager of Cwrt Mytton care home, has also seen how doll therapy has had an impact on Brenda. She explains: “The majority of residents think the dolls are real. I just see the benefits. It’s evident to see Brenda is content with the baby. It gives her reassurance, beyond anything we can do sometimes.”

Doll therapy involves offering dolls to people living with dementia with the aim of improving their comfort, engagement and quality of life. Most evidence in support of doll therapy is anecdotal, though there is a growing research base. A study completed in 2007 found it was an effective approach in caring for older people with dementia. And Australian research in 2019 cited by the Social Care Institute for Excellence concluded that doll therapy can provide some residents with enjoyment and purposeful engagement.

Doll therapy in Cwrt Mytton care home started when residents’ grandchildren would bring in their dolls and there seemed to be a natural affinity, adds Chivers. In late 2018, the care home received 10 new dolls from Monmouthshire county council as part of a plan to help people with dementia.

Sarah Turvey-Barber, the council’s strategic and sustainable living manager, commissioned the dolls and recognises that dementia is a challenge for health and social care services in the area. She says: “There are nearly 8,000 people with a diagnosis of dementia in the greater Gwent area and it’s expected to be nearly 12,000 by 2030.”

Turvey-Barber was granted funding to buy the dolls. She purchased 50 and they have been shared around other organisations in Gwent.

The dolls – which cost between £165 and £185 each and were found on Amazon – weigh the same as a baby; the chest rises and falls as if it were breathing, there is a palpable heartbeat and some make gurgling noises.

“Initially the feedback [about the dolls] was brilliant,” says Turvey-Barber. “Nursing staff said it was making such a difference, making people feel calmer and helping them to understand and engage in conversations.” She went to a carers group herself and remembers: “A woman started to interact with me and called the baby a name. Her husband said it was the most verbal she had been in a while. It was incredibly moving.”

Turvey-Barber has plans to expand the project into other areas of health and social care. There have been conversations with the Welsh ambulance service around whether it might be able to use them and there are plans to use them when doing assessments and disability checks, as well as in people’s homes. “I think we’ve only just tickled what we could use them for. All sorts of opportunities come to mind,” she says.

But doll therapy isn’t for everyone and staff recognise it can be difficult for families to see their relative caring for a doll as though it were a real baby. “The main focus of them is for distraction, comfort and reassurance. You also have to respect some individuals don’t want that,” says Chivers.

At a day centre in Rhymney, which also uses doll therapy, not everyone is a fan. Sandra Forbes, senior communities services officer, who manages Oaklands day centre, recalls one woman who, when presented with a doll, threw it across the room. “Each person reacts differently,” she says. “Sometimes they’re not bothered and won’t look at them at all.”

However, she remembers one woman who didn’t want to be in the day centre and wouldn’t engage with anyone. One day she was given a doll. Forbes says: “When she had the doll in her arms she would smile and talk to it. It was unbelievable. The dolls had the most impact with her than anybody else. Her whole demeanour changed.”

Phyllis Greening, 90, an attendee who has dementia, also appreciates the dolls. “I love them,” she says as she holds one in each arm. “They remind me of my twins. I had a boy and a girl. I’m also a twin.” Across the table, a woman sings to the doll she holds in her arms before she falls asleep in her chair. A man shows his doll to the therapy robot dog he is stroking.

Forbes admits: “In the beginning I thought it would never work. They’re dolls, not babies. But we had to buy more because there weren’t enough to go round. They are a comfort and it’s up to attendees how they use them.”