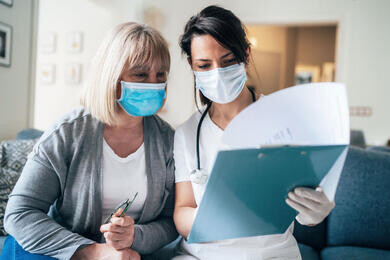 Almost half of people with potential cancer symptoms did not contact their GP during the first wave of the pandemic, a survey suggests.

Symptoms left unchecked included coughing up blood, lumps and changes to the appearance of moles.

But this study, of almost 8,000 people, captures the fall in people contacting their GP in the first place.

The team that carried out the study, from Cardiff University and Cancer Research UK, said this raised concerns that people could be diagnosed later - and so be less likely to be treated successfully and recover.

They surveyed a representative sample of people across the UK recruited from two panels - HealthWise Wales and Cancer Research UK's Cancer Awareness Measure - between March and August 2020. 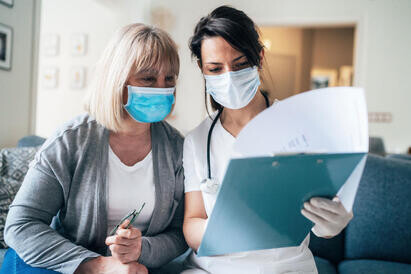 The team found that of the 3,025 people who said they had experienced at least one symptom which could be a warning sign of cancer, 45% did not seek help.

They also found that:

Some of the reasons given by people who did not contact their GP were not wanting to waste doctors' time or put extra strain on the NHS; not wanting to be seen as someone who made a fuss; and fear of catching Covid at appointments.

But people who did contact their GP reported feeling "safe" and "secure" when attending face-to-face appointments.

While the first lockdown saw NHS services significantly reduced, this was not as true during the second wave of the UK's epidemic.

The Cardiff and Cancer Research team plan to run another round of the survey to see whether people's likelihood to contact their GP changed in the later part of 2020. 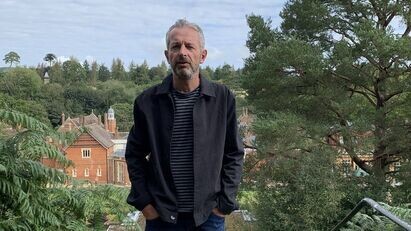 Matt Black, 55, went to his GP after persuasion from his wife. He had been experiencing flu-like symptoms, stomach problems and unexplained weight loss but believed his symptoms were linked to Covid-19.

It was only after visiting the Royal Free Hospital in north London, having lost more than 10kg (22lb) in weeks, that a tumour 9cm (3.5in) long was discovered in his bowel.

Mr Black said Covid had "delayed" his decision to seek help, since he was "worried about being a drain on resources".

He added that "there was so much confusion about what Covid symptoms were at that time" that he assumed what he was experiencing must be related to the virus.

Mr Black wanted to send a message to others to not "just think it will go away - if you've got a problem, a symptom, get it checked out".

Months on and he said he felt like the "luckiest guy in the world...I'm running, I'm walking, I'm working". 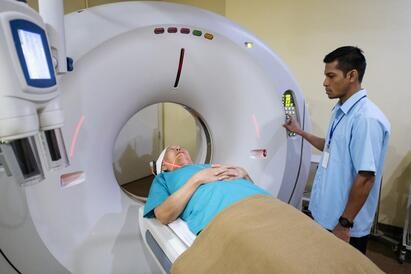 'The NHS is open'

Prof Kate Brain, who led the study, said she was concerned that the message during the first lockdown, to protect the NHS, might have left the public might thinking "cancer can wait".

In the first months of the pandemic, people were broadly discouraged from using health services, and many screening services were shut down.

But from last summer onwards, and during the second wave of infections, huge efforts were put into keeping NHS services running.

People were encouraged to come forward with any health concerns, especially symptoms which could be cancer-related.

While it's been well-reported that cancer screenings and referrals for treatment have fallen, Prof Brain said this was the first population study to assess people's "attitude and behaviour towards cancer symptoms and screening".

The message to the public was that "the NHS is open safely," Prof Brain said.

And she called for a concerted national campaign to encourage people to contact their GPs with urgent issues.

India Covid: Dozens of bodies wash up on banks of Ganges river
Read Article
Why India's Covid crisis matters to the whole world
Read Article
Injustice' as man left in Nottinghamshire care home for months
Read Article
Tea with a pony sessions have power to help those with dementia
Read Article
Why Olivia Colman's new film will leave you disorientated
Read Article