A million people in the UK are expected to be living with dementia by 2025. While there is no cure, there's growing evidence that music can help ameliorate symptoms such as depression and agitation, writes Kelly Oakes - and also bring these people and their families some much-needed moments of joy.

When he was just 30 years old, Daniel received a diagnosis nobody was expecting.

The former drummer and engineer had to give up work after developing problems with his speech, memory, and motor skills.

The culprit was a rare form of Alzheimer's disease, a condition most common in over-65s, but which can affect much younger people too.

"Certain things happen every day, me forgetting what I've done, and also what I have to do," Daniel says. "It gets a bit overwhelming. Generally it's quite hard to be in social environments."

It was only when Daniel was diagnosed that he realised his father, who died at the age of 36, must have had the same condition.

The news came just after the first birthdays of his own children, twins Lola and Jasper. 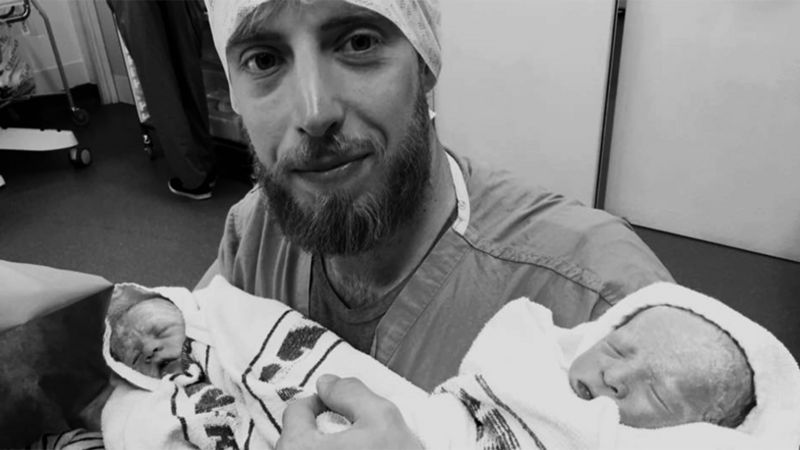 There's a 50:50 chance, doctors say, that the faulty gene Daniel inherited will have been passed on to them too.

"For someone of Dan's age, their lifespan is about four years from diagnosis. It's pretty scary to hear that, you just feel hopeless," says his partner Jordan. "It's hard to watch somebody so young, fit and healthy have all these symptoms."

Daniel has joined a choir of people with dementia, put together by actress Vicky McClure in memory of her grandmother who lived with the condition and died in 2015.

While caring for her nonna, McClure noticed that music, in particular singing together, brought a smile to her face. 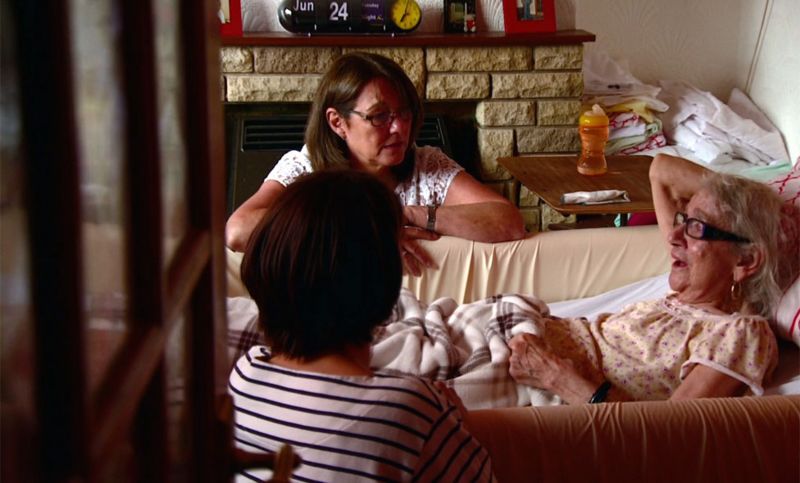 "When we sang we were all on the same page," she says.

The 18-strong choir is made up of people living in and around Nottingham, where McClure grew up, all of whom are living with dementia in one form or another.

Dementia is an umbrella term, covering any progressive change in someone's thinking abilities. It can manifest in different ways, affecting memory, language, emotion, and behaviour, depending on what is causing it and which parts of the brain are damaged.

For most people dementia progresses slowly, meaning they live with it for many years.

There is no cure, though doctors can try to prevent further damage and slow the progress of the disease in patients with some types of dementia, vascular dementia for example. In other cases, treatments focus on alleviating symptoms and helping patients to live well with the illness.

That's where music comes in. There is growing evidence that music can play a part in helping people with dementia live happy and fulfilled lives after they are diagnosed.

To help investigate this idea, Vicky McClure's choir took part in a study run by Sebastian Crutch, a professor of neuropsychology at the Dementia Research Centre, University College London, into how music and visual arts affect people with dementia.

Crutch's work looks not only at what people say they feel during and after these activities like singing or viewing an exhibition, but also how their bodies react. The choir's singers wore a wristband that measured heart rate, temperature, movement, and "electrodermal activity" - sweat levels on the skin.

The results showed that movement and heart rate decreased during the choir rehearsals. People living with dementia can often feel agitated and restless, so these scores probably indicate that they're feeling calmer as they sing.

That was also the message from the survey asking the singers how they felt - which showed a positive effect on their wellbeing. The two results backed each other up, Crutch notes.

"I think for us that's quite an important signal, because usually people had looked at these things in isolation," he says. Previous studies tend to have relied only on self-reported effects, or on external measures, but not both. 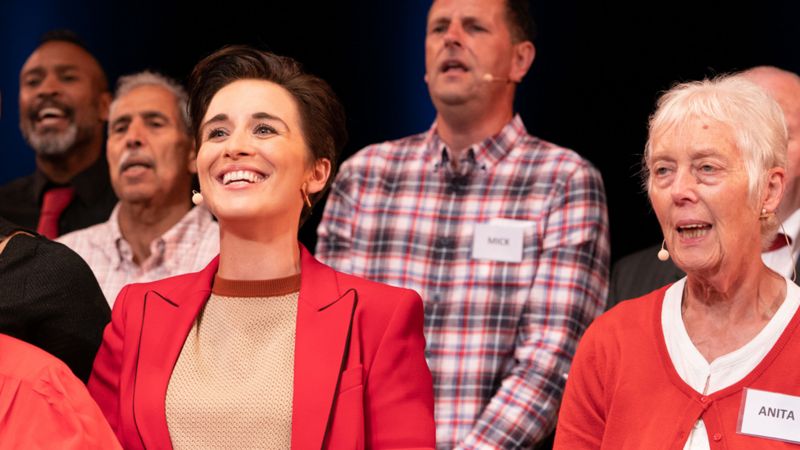 Most of the evidence concerning music and dementia relates to courses of music therapy.

A research review published in 2018, looking at music therapy trials in nursing homes or hospitals, found that the sessions improved symptoms of depression and behavioural problems in people with dementia, but said more research was needed to determine the duration and other effects.

And music does seem to have more benefits than activities such as painting, going for a walk, or visiting friends, says Crutch.

The right song can instantly transport you back in time, eliciting strong emotions even if you haven't heard it for years. This ability music has to reach right inside of our brains and pull out old memories we thought were long gone applies to people with dementia too, not only to those without without it.

Rae, a former music teacher, gave up playing piano after she was diagnosed with Alzheimer's. But during the first choir rehearsal it all comes flooding back as she sits down to play for the first time in 10 years.

"I didn't think I'd remember how to play," she says.

A little later she finds herself accompanying members of the choir singing Ben E King's Stand By Me. "I was saying, 'I hope my fingers know what they are doing, because I don't.' And they did, they did know what to do, and I am thinking, 'Ya-hay!'"

Similarly, relatives of someone with Alzheimer's can be surprised to discover that they can remember every word to a song they knew when they were 17, says Crutch, despite struggling to remember what they did yesterday.

This is because dementia causes particular problems with short-term memory - making someone forget if they've eaten breakfast or showered, for example - while long-term memories may remain intact, at least in the early stages of the illness.

Part of your long-term memory, called procedural memory, stores information on how to do everyday things, like brushing your teeth, or, in the case of a former musician like Daniel or Rae, how to play your instrument. When damage to the brain makes accessing those memories harder, music seems to be able to flip a switch to bring at least some of them back.

"It's a sort of emotional and physiological physical memory, that music is very powerfully able to trigger," says Helen Odell-Miller, professor of music therapy at Anglia Ruskin University. "It can trigger the [memory of] rhythmic patterns, for example, that the person knows."

On top of this, listening to music involves several different parts of our brain, including those involved in language and emotion. So even if one part related to music is damaged, other parts may still work just fine.

"Music taps into our emotion circuits, which are actually often damaged much, much later in diseases like Alzheimer's than the circuits that support memory for day-to-day activities," says Crutch.

Daniel is taking part in a five-year study at Anglia Ruskin University, in Cambridge, looking into what actually happens in someone's brain during a session with a music therapist. 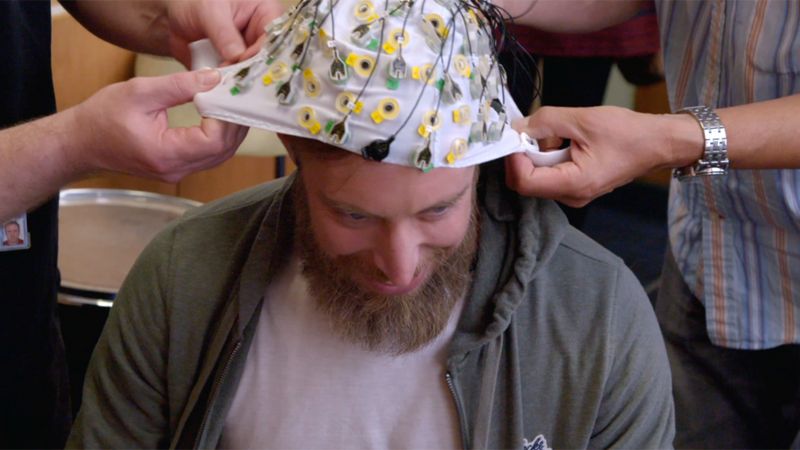 Jörg Fachner, professor of music, health and the brain at the university, says music can be especially important as it provides a communication channel that doesn't rely on speech or language skills, which may be impaired by dementia.

But there's also something special going on inside Daniel's brain as he plays in time with the therapist.

Both participant and therapist wear caps that measure their brain activity as they sing together and play instruments. At certain moments as people play music together, their brains appear to synchronise, showing the same patterns of brainwaves.

"How in particular that works, when you're doing music therapy with a patient, this is something that we are still trying to find out," Fachner says.

And Daniel illustrates the effect mentioned by Helen Odell-Miller - as the session progresses, his ability to play in time improves.

In the past few years plenty of music-based initiatives have sprung up for people with dementia.

The Alzheimer's Society runs Singing for the Brain groups, which involve getting together with others to do vocal warm ups and sing familiar songs, while charity Playlist for Life advocates for prescribing personal playlists.

A national campaign called Music for Dementia 2020 hopes to make some form of music available for everyone with dementia by the year 2020.

But while these activities are now common, it's clear more research is needed to understand how to help people get the most out of it.

Helen Odell-Miller is investigating the impact of carer-led musical activities that people with dementia and their loved ones can do at home.

She's just started work on a study involving hundreds of couples from five different countries - the UK, Australia, Poland, Germany, and Norway - where one person has dementia and is still living at home.

Each couple will spend half an hour each day making music, supported by music therapists. "It will be about embedding this in daily life," she says.

The musical intervention will be compared to reading or listening to stories, and Odell-Miller will look not just at how it affects the well-being of the person with dementia, but also how it affects their carer.

Music could be especially potent for those with severe dementia, because the present moment may be all they have, she points out.

"To that person, the now is the most important moment, because they don't have the capacity to remember what happened the minute before."

One thing music cannot do for people with dementia is to reverse damage done to the brain, or change someone's prognosis.

"I would definitely say that singing in a choir is not going to extend someone's life," says Sebastian Crutch. "We wouldn't expect it to have any impact on the rates at which the proteins which characterise these different diseases are forming in the brain, or slow down the killing of brain cells."

But while the long-term benefits of music are still uncertain, it's clear that music can provide shared, in-the-moment experiences that both people with dementia and their loved ones benefit from.

Is it possible cold water could hold a clue to a dementia cure?
Read Article
In London, confusion and scepticism over new COVID-19 rules
Read Article
Wife reveals her husband is '100 times worse' after isolation of lockdown
Read Article
Coronavirus vaccine: When will we have one?
Read Article
Asda mask row: Man with dementia 'told to leave shop'
Read Article